Welcome to The Gadget Professor Show #413 hosted by Don Baine. 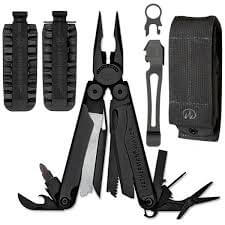 Tim Leatherman (an Oregon native) received his Mechanical Engineering degree from Oregon State University. While on a budget trip to Europe in 1975, Tim and his wife Chau constantly came across leaky hotel plumbing and road-side fixes for their cranky Fiat. Tim realized the need for a pliers based, multi-purpose tool. “I was carrying a scout knife and used it for everything from slicing bread to fixing the car. But I kept wishing I had a pair of pliers!”.

When Tim came back to the states, he took his “multi-tool” idea, some sketches he made on the trip and got to work.
When Tim started on the prototype for this new tool, he estimated it’d take him a month. Instead, it took the next three years to build the prototype he envisioned and file for a patent. With the patent application and prototype in hand, he set off to sell his idea. Unfortunately, the companies he approached didn’t bite. Knife companies thought his invention was a tool, and tool companies thought it was a gadget. Neither were interested.

For another three and a half years, Tim faced one rejection letter after another. Until he partnered with his college friend, Steve Berliner, and in the spring of 1983, they received their first order for 500 tools from Cabela’s and launched the first Leatherman tool.

This site uses Akismet to reduce spam. Learn how your comment data is processed.